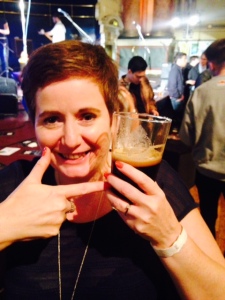 Our hearts sank when we approached as the queue was long, and frustratingly the cash on the door was moving faster and but thankfully the organisers started to get things flowing.  We paid £7.00 entrance including a branded glass with beers/ales/ciders between £3-4 per pint.

I spotted a banner with Five Points Railway Porter but sadly they did not have any  – I hope that this was due to overwhelming demand rather than lack of planning. So onto Cloud Water Brewery a new brewery formed in February of this year; I have had their Cream Ale before and was thrilled to see this was available and was my first pint of the evening.  Boddingtons you have lost your crown.

My next drink was not something I expected –  a cocktail made with beer; a Black Russian made with an Imperial Stout and Vodka by the fabulous North Bar.  It was dangerously good and I will certainly be having a go a mixing this delight come Christmas.

This night was mainly one of familiarity as Magic Rock’s Highwire was next on the list – this brewer can do now wrong but this imitation of an American West Coast Pale Ale really floats my boat – just so refreshing and fruity.

My final beer of the evening Alechemy…..unfortunately after one too many I genuinely cannot remember which one I had – but it was good.

Oops nearly forgot about the food.. there were two burger stalls, fish and chips, charcuterie and asia street food from Bundobust but today food was not on my menu.

Overall I enjoyed exploring the town hall during the Festival but I do not think ticket price is fair especially as the prices were on the high side. If I we had a diary clash next year I would think twice about going as there are some many other options which are not has hard on the pocket.

A blog about food and drink I have tried or made.