The first time I had the pleasure of dining at My Thai  @ The Old Steps was for our 2016 Christmas party.   Before I even knew about the quality of the food, I was thrilled that we were not going for a dried turkey dinner with overcooked vegetables and salty packet gravy – there is nothing worse and  I am sure you’ve all lived that particular festive nightmare.

Fast forward to February 2017 and we needed a fast and tasty lunch. It was then my foodie Genie conjured up a fond memory.  We headed down the steps and entered into this small and cosy food palace.

We were greeted with a huge smile and warm welcome from our waitress and were seated opposite the industrious and open kitchen – possibly the best spot in any restaurant for me;  I love watching the relationship between the kitchen and the front of house ; it fascinates me and speaks volumes about a team.

Within a few minutes we had decided and our orders were placed.  A combination of Tod Mun Pla (Thai Fishcakes) and Chicken Satay with Peanut Sauce, followed by  Crispy Chicken and Tamarind Duck.

I have never been to Thailand so I  cannot authenticate if these delicious fish bites were true to their street food orgins but they were delicious, full of fishy meatiness with a hint of lime and a warm delicate heat from the curry paste.

Our main courses were served almost immediately and we both looked on with jealousy at each others dish.

The Crispy Chicken was as fabulous as I remembered (confession I could not help but order this dish again following my previous visit, not very adventurous I know)  with a slightly spiced and crispy coating surrounding the juicy and tender chunks of chicken.  The garlic sauce was sticky and sweet with super fresh carrots and spring onions running through the dish. The rice was the perfect clean accompaniment.

Crispy Chicken and Tamarind Duck by My Thai @ The Old Steps

The crispy duck with a tamarind and palm sugar sauce was equally as tasty and David agreed between the two it was hard to hand out a first prize.

Overall the York Place venue is cosy, the team are friendly and super efficient.  The quality of the food and the flavours are outstanding as is the value for money – a  real Winder Winner.

I cannot wait to try the sister venue –  Thai Shack at Wade Lane  – to see how it differs from the Old Steps, I doubt it will be much other than the decor.  I even know which dish I will sample next, when in the words of My Thai  “I leave my pack lunch at home”.

Never baked Lemon Drizzle before yesterday  but a dear colleague is moving on to new challenges and this cake is her favorite.  It’s taken me a while to find the elusive 30 x 23 cms tray that Mary Berry uses  (if you follow me on twitter you may have caught my grumblings).   I was tempted to pimp this but i’m playing safe today.

Grease and line your  30 x 23 cms tin with baking parchment/paper (remember, if you use larger tin you wont get the same rise).  Line your tin I and heat your oven to 140°c (fan) or Gas mark 3 then weigh out and prepare your ingredients but hold on for the crunchy topping.

For the crunchy topping you will need

My oven was slightly too hot – school girl error – always check your temperature or expect that doming.

The lemons, despite being fabulously juicy, produced a lot of juice which is never a bad thing.   However  I think the amount of juice they produced took the crunch from the topping – too much juice to sugar.  It could also have been that the bake was too warm and melting the sugar .  What I do know is that baking is a learning curve and next time I will measure juice to try and find that perfect mix and use a more averaged size lemon.  In the meantime a cheats sprinkle of granulated the morning after gave these the crunch they deserved.

Every cloud has a silver lining as these lemons gave me an incredibly zest and moist lemon drizzle and I look forward to baking this again but next time with some savory thyme.

Hope you like this and my pictures and if you try this with a twist then please share your thoughts.

Duck n Roll sought us out as the sweet aromas of their duck reaches outside to Albion Street. We followed our noses and ordered lunch at the latest addition to Trinity Kitchen.

We ordered and got food within 8 minutes! Now that’s fast.

The Classic was a duck pate burger served in a plump brioche bun with spring onion and lashings of sweet chilli sauce topped with cheese. 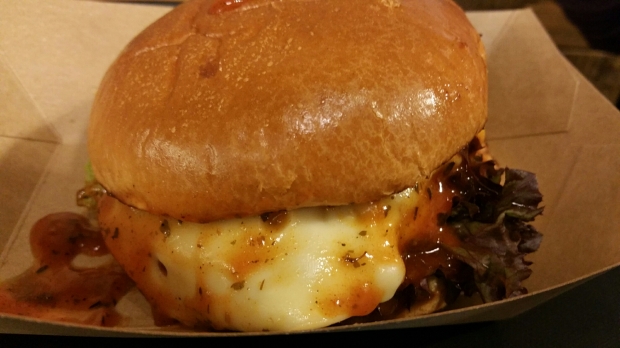 Then for my L’Asiatique. It did not disappoint; it was crammed with duck, spring onions; cucumber and Bean spouts with  a rich hoisin sauce. This juicy parcel was a tasty and filling lunch time snack.

Duck n Roll is a great addition to Trinity Kitchen. Really recommend their tasty bites in fact  you’d be quackers not to.

We jumped in here on the first chilly night of Autumn as who would recommend a good hot pie to warm you through?

We were quickly seated with a drinks order taken. Yorkshire Gold Ale (Leeds Brewery plus a few other local ales) with a  water for me.

There was a good choice of pies and sides and we ordered the Kate and Sydney with Minted Mushy Peas and Moo Pie with Mash and chose some Onion Rings for a nibble.

It was a busy night and there was a nice buzz about the place shame the temperate was so cool!  We asked the staff to turn off the air con which was pumping out chilled air (not what you’d expect in October) as between this and the slow shutting entrance door it was blooming freezing (the air-con remained on which was disappointing).

The drinks arrived soon followed by the onion rings which were huge (sorry there are no photographs), hot and crispy and a very naughty and welcome nibble before the main event.

Thankfully the hot pies arrived not long after and on first impressions it was looking good. Both pies were encased in a golden pastry, so many places offer pies in dishes with lids – in my opinion that is not real pie –  it’s a casserole with a lid.

My Moo Pie (Steak and Ale) was tasty; with crispy pastry, rich gravy, tender meat but wait for it, there was an interloper!  Lots of diced carrots which were not welcome! Why, oh why, do restaurants add in ingredients that is not listed on a menu!   If I wanted Meat and Vegetable Pie I would have ordered that. A meat pie is allowed onions to give it flavour. Don’t get me wrong I am not anti-carrots but come on don’t put fillers in to keep your costs down and not list it! We liked that the gravy was served in a jug i don’t like to add mine all at once; as I like my pastry to stay as crisp as possible before being devoured.

The Kate and Sydney Pie was similar but the balance between the steak and kidney was 90% steak (something I would not complain about, not being a lover of kidney) but David was disappointed, however this was without carrots – he was the winner in my option.

Atmosphere at the venue was good but a cool temperature and with the urban décor (cheapskates) and it made it colder on this Winter night.   This diner-esque pie emporium is in a great location, close to Brew Dog (who sell their Pies to order).

The staff seemed happy in the jobs and were bright and breezy although slightly dippy with it – I could not imagine them handling a large party or customer rebellion.

Overall a 3 out of 5; it gets my vote based on the price (£22.60) versus quality we would return for a quick tea but ensure we are not sat by the door. I don’t think the Pieminister is pretending to anything it isn’t which I recommend it for.

Like Loading...
Aug 29, 2015Aug 29, 20151 Comment
This is a trip down memory lane, as I went here on a second date and that date is now my fiancé – here is the review (of the restaurant not my date)..
Went here on a date (my date booked Ambiente Tapas) and I was not disappointed on both counts!  The greeting was warm and the young man who showed us to our table was a breath of fresh air;  he was so enthusiastic about the menu and gave us some great recommendations.

We ordered 6 dishes and all were very good. We had the Lamb, Belly Pork, Lemon Sole, Calamari and the Morcilla with Potato Bravas and Judias Verdes.  My only feedback for improvement is that the potato bravas chunks were not large enough to absorb the flavours of the warm piquant sauce.  The Morcilla was really tasty, but I would have preferred a regular egg, softly poached to the quail egg, as it was overpowered by the black pudding.  The Judias Verdes were a lovely supplement to our protein fest.

The atmosphere was relaxed as the restaurant was not busy, which is understandable for a Sunday night – maybe some fabulous Spanish music would compliment .

The wine we drank was amazing. We had a Rioja reserve which was delicious with rich fruit and good spice and considering the bill came to around £60 (I think as my date insisted on paying)  I view this as good value.

I look forward to going back on a Friday night and sampling their Paella.
http://www.tripadvisor.co.uk/ShowUserReviews-g186411-d3618109-r232945528-Ambiente_Tapas_Restaurant-Leeds_West_Yorkshire_England.html#

A blog about food and drink I have tried or made.